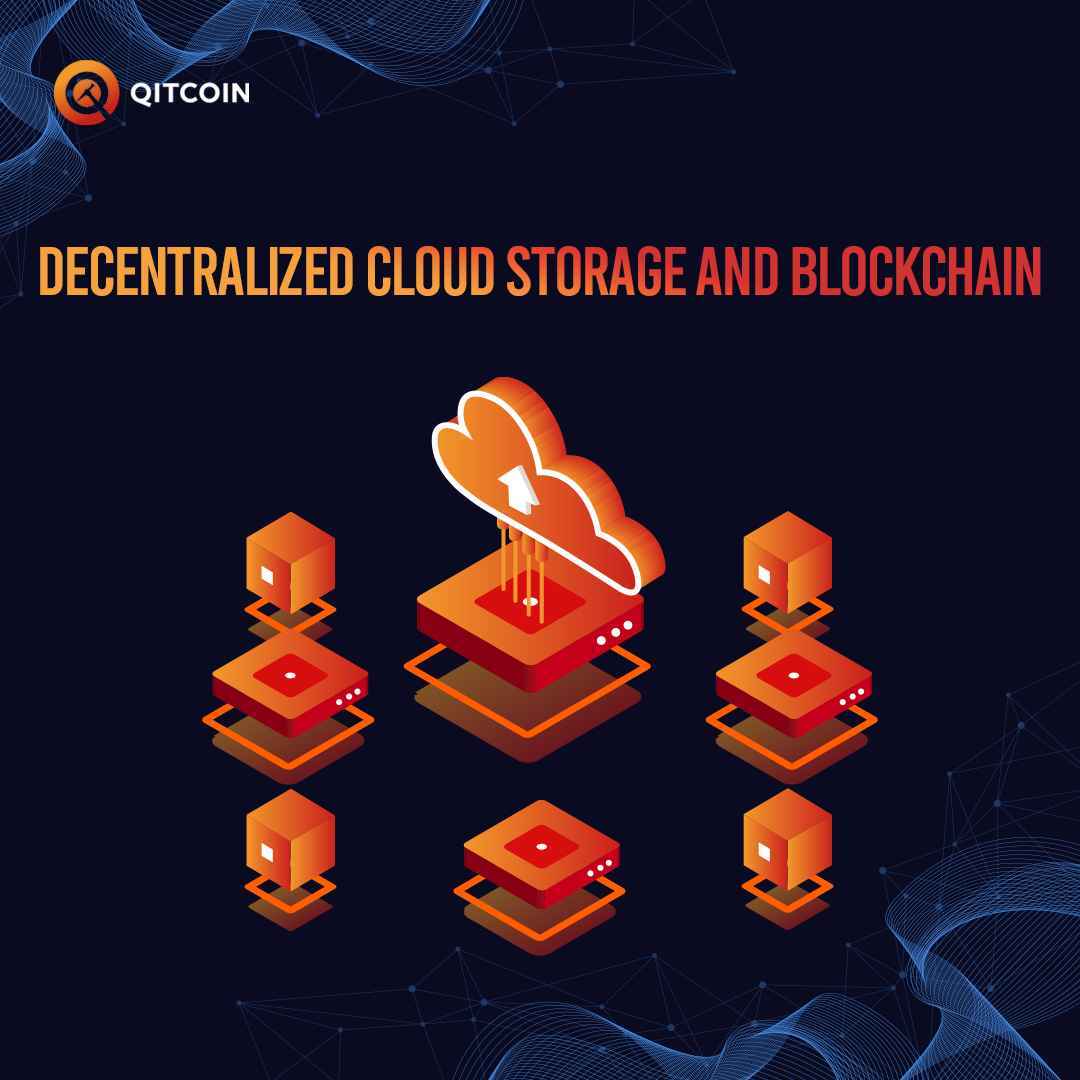 Decentralization is an ideology that advocates for a liberal style of administration in which no single authority has absolute power over all aspects of life. In a decentralized storage system, users may save their files without depending on large data hubs like the cloud.

Decentralization in data storage has gained recognition because of its user-friendly and trustable features like privacy and security. Decentralized data centers rely on a peer-to-peer network of users who each store small, encrypted chunks of the overall data. In this way, a reliable data storage and sharing system has created that can be founded on blockchain or any other peer-to-peer network.

Qitchain QTC is a Decentralized Cloud Storage technology that is both efficient and unique. The advantage of adopting such storage is that it can perform all of the tasks of a decentralized web, including security, privacy, no single point of failure, and cost-effectiveness.

The process of moving authority from a central government to a more decentralized and “liberal” framework is known as decentralization. Files are encrypted, fragmented, and disseminated throughout a global network rather than being kept in centralized data centers.

Decentralized storage is becoming more popular than centralized cloud storage for a variety of reasons.

Data breaches in centralized cloud storage have occurred in recent years, as have data outages, storage costs have increased, and most crucially, there is a lack of ownership. As a result, there was a compelling need to fix these concerns. These issues can be solvable via a decentralized storage system.

Decentralized Storage: How it Works

As in decentralized storage system, the data is not stored on a single place but on multiple nodes. Client’s data is encrypted. It stores multiple copies of the same piece of data in separate locations. The users who have the encryption key are only allowed to access or read the file.  This secure storage system motivates users to participate, host and hold servers in the system. Numerous small entities contribute to the network by generating storage space and computing power.

An extra blanket of protection and security is added via ‘Sharding’ process. Sharding refers to the process of distributing data over a network of nodes. Decentralized locations store the data and distribute it. Interlopers who try to break into these places will find encrypted data blocks. Furthermore, they will only be able to get a portion of the information, not the complete file. To sum it up, blockchain-based decentralized storage systems ensure high level of data security which no other storage system can provide.

There is no personal information about the user in the data in these installations. Miners, in any case, only get little portions of the entire file. This is how decentralized storage solutions protect sensitive data from prying eyes. When users attempt to retrieve their files, all data chunks have gone through the process of validation. The miner is removed from the network if something has been changed. The system retrieves and displays the modified portion from a redundant duplicate of the original file kept in multiple locations, alleviating users’ concerns.

Platforms for sharing computational resources have been around for a long time.

SETI@home, for example, is a scientific project located at UC Berkeley that employs internet-connected computers in the Search for Extra-terrestrial Intelligence (SETI), in which anybody may contribute by downloading and analyzing radio telescope data using a free application. In this scenario, Blockchain technology appears as a strong facilitator of decentralized cloud solutions.

Ethereum emerges as a major facilitator of decentralized cloud solutions.

Because blockchain-based designs use consensus and incentive mechanisms to assist distributed computing overcome some of the issues mentioned, they are a good fit for distributed computing. For example, token-based node host earnings is a wonderful approach to incentivize interested parties to put their resources online while simultaneously preventing bad actors from abusing the system.

There are following Blockchain-based decentralized cloud solutions which include Ankr, Dfinity, and Solana. The expectation is that these new decentralized cloud providers will enter the market. They will compete with already existing players by offering new services.

Decentralized Cloud storage has a lot to offer in terms of both safeguarding crypto data and minimizing storage expenses.

This will make it easier for consumers and organizations to transact bitcoins with one another. It will eventually help the Cloud and Blockchain sectors develop.

Unlike typical Centralized Cloud service providers, this decentralization eliminates a single point of failure. For example, if the controlling firm has an attack, the whole storage system has an impact.

Decentralization Cloud storage, on the other hand, provides protection and confidentiality to cryptocurrency by separating and distributing files over several nodes.

Furthermore, decentralized Cloud storage allows for file encryption via a private key, preventing other nodes from viewing the file.

The danger of losing cryptocurrency files has significantly reduced. Thanks to data redundancy, which stores several copies of a file in case of a data transmission fault.

Furthermore, because blockchain storage systems are highly efficient in and of themselves, combining them with cloud computing may save a lot of money.

Implementation of decentralized systems with a focus on data security is rising day by day.

It has shown that trust is a key element when it comes to data security aims. Users are becoming more involved in the process of creating services.

Decentralized cloud storage services offer a significant possibility for a new cloud industry, matching the supply and demand for IT resources of a large user base.

The dynamic and self-contained character of the emerging infrastructure raises security issues, which might be a deterrent to realizing such an opportunity, which is otherwise plainly enticing and promising in terms of predicted economic rewards.

It allows resource owners to efficiently safeguard and safely erase their assets while storing them on decentralized cloud services.

For robust resource preservation, the system combines All-Or-Nothing-Transform with carefully defined algorithms for slicing resources and decentralized allocation in the storage network. Consider both availability and security assurances in the approach, and provide resource owners authority over their settings.

‘Fog Computing is a decentralized cloud storage system for cryptocurrencies. Millions of dollars have invested in Fog Computing presently.

This will not only entail millions of machines connected without central supervision, but it will also make secure yet affordable bitcoin storage choices available; blockchain storage prices can lower cloud computing costs by 50% to 100%.

The nodes in a decentralized storage system are unable to see or modify your files since all data uploaded to a decentralized storage network is encrypted by default. As a result, you have unrivaled security and privacy, ensuring that your information is safe. Because of data encryption, nobody can access it without its unique hash. You can store personal and sensitive information without having any fear.

Decentralized data storage systems, provide a high level of security. They split the data into smaller chunks, produce copies of the original data, and then use hashes or public-private keys to encrypt each portion independently. The entire procedure protects the data from malicious parties.

To make the process more efficient, blockchain-based decentralized storage systems allow the host to cache frequently-used data. It relieves server load and reduces network traffic. This eliminates the need for hosts to access the server on a regular basis to retrieve information.

Decentralized cloud storage encrypts data, breaks it up, and distributes it for storage on drives. It is operated by various organizations in a variety of locations, each with its own power supply and network connection, creating something much less wasteful. A decentralized file storage system reduces both hardware and software expenses. You also don’t require high-performance equipment to use it efficiently.  More significantly, a decentralized network may include millions, if not billions, of nodes. This significantly increases the amount of storage space accessible. Decentralized data storage does not need high power consumption to run on the system rather it uses less computer power with Bandwidth.

No dedicated Servers for Storage

Unlike centralized storage systems where a finite few data centers host your data, decentralized storage networks are composed of a series of nodes eager to host the data in a secure manner. It does not only offer a wider range of storage bandwidth, but it also reduces the overall storage cost, making it a cost-effective option.

What is conditional proof of capacity cpoc for cryptocurrencies?