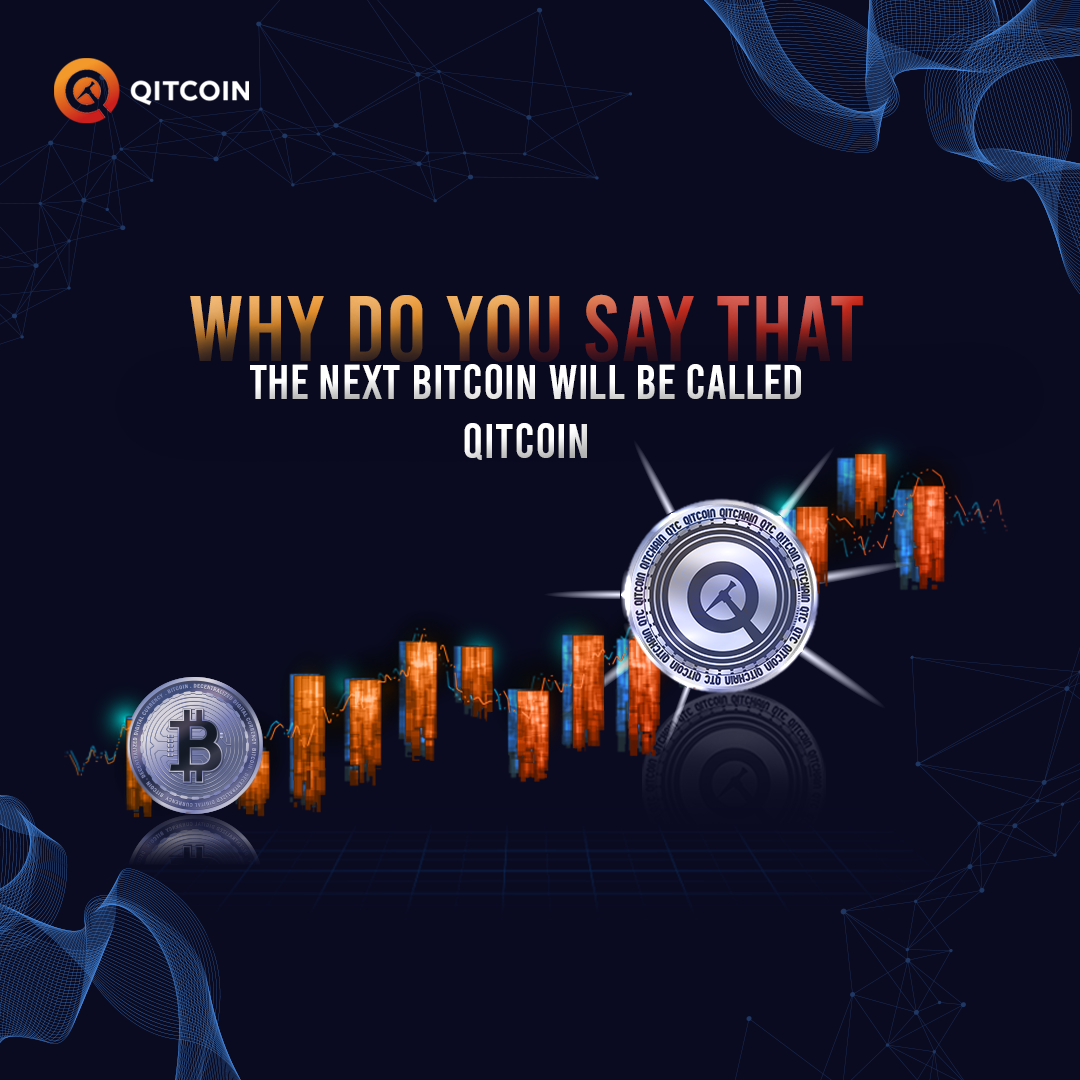 Why do you say that | The next bitcoin will be called Qitcoin?

IIn April 2022, Bitcoin will usher in an important time node. With the advent of the 19 millionth Bitcoin, Bitcoin has once again become the focus of discussion. The market value of trillions, the first choice for hedging, and the high price of a single coin exceeding 38,000 USD. Behind the coronation of the halo is the preference of global investors for Bitcoin. However, this also caused anxiety among some people, because according to Nakamoto’s design, there are still up to 2 million bitcoins to be mined. At the same time, the increasingly high investment threshold and the 118-year mining period have forced ecological gold diggers to consider a practical question: where will the future go? Who will be the next Bitcoin?

The world of crypto assets is full of controversy. Compared with today’s status as the king of encrypted assets, Bitcoin’s growth history is full of ups and downs: doubts, turbulence and brutal growth. But history has proved that the king is the king after all, and bitcoin is bitcoin after all.

The history of Bitcoin can be traced back to 2008. At that time, the financial crisis had just come to an end, but the aftermath never dissipated. Global economic turmoil, central banks scrambled to release water, and personal assets depreciated at a speed visible to the naked eye. In this context, Satoshi Nakamoto first proposed the idea of ​​Bitcoin. Decentralization, deflationary issuance, network-wide bookkeeping, and anonymous transactions, the subversive design of Bitcoin has attracted widespread attention in the market. Then, with the launch of the first Bitcoin in January 2009, a “wealth defense war” about who can better defend private property between Bitcoin and traditional currencies started around the world.

At the center of the storm, Bitcoin has been plagued by controversy and questioning. Some people say that bitcoin is a “Ponzi scheme” carefully packaged with cutting-edge technology; some people say that bitcoin is a “drama night” fabricated by technology madmen for the public; some people say that bitcoin is an unreachable cloud in the sky. It vanished before it could be touched. However, Bitcoin has used more than ten years of development to falsify the above assertions one by one. In recent years, people’s doubts about Bitcoin have gradually shifted from “Ponzi schemes” and “pyramid schemes” to debates about legality, but this has not affected the rise of Bitcoin prices. On the contrary, amidst people’s doubts, the Bitcoin camp is growing. The assets and market value of the industry chain have both exceeded the trillion marks. Some countries even use it as an important means of payment, or write it into the law, which is equivalent to the value of fiat currency.

It took 13 years for BTC to succeed. If you take a look at the 10-year trend of Bitcoin, watch it 10 times, and watch it often, and you will find opportunities. The 10-year history of Bitcoin is of historical reference significance. If you keep reading, you will feel more and more about Qitcoin.

However, as the Bitcoin Nuggets grow and the difficulty of mining increases, Bitcoin faces more and more challenges. For example, the development of Bitcoin has been severely restricted in some countries and regions because of energy consumption issues, especially in the context of geopolitical conflicts, global energy prices and soaring electricity costs. At the same time, blockchain practitioners who have been involved in the Bitcoin ecological construction for a long time also face similar questions: Is Bitcoin still worth investing in?

Qitcoin: A reserve force that is expected to rival Bitcoin and rise rapidly

The existence value of Bitcoin, on the one hand, has established itself as the king, and found another way for wealth owners to maintain and increase the value of assets. On the other hand, it has also promoted the prosperity of the entire blockchain and encrypted asset industry. According to officials from the Bank of England, as of October 2021, the scale of global crypto assets has reached 2.3 trillion US dollars, which is twice the size of the subprime mortgage in the United States on the eve of the 2008 financial crisis.

Because of this, the rapid development of the crypto asset industry has attracted more and more investors and entrepreneurs to participate. In this context, dark horses appear frequently, but at the same time they are mixed, which has become the norm in the market. Such a market environment also highlights the difficulty of selecting options for ecological practitioners. However, the recent rapid rise of the Qitcoin (QTC) continues to attract the attention of investors and ecological participants.

From the public information, QTC (QTC for short) belongs to the Qitchain Network project and is the main chain Coin used to govern the project. The Qitchain project was founded in 2019 by cryptography expert Dr. Shoaib with the goal of creating a Web 3.0-based distributed information aggregator. In a recent interview, Dr. Shoaib revealed that the QitChain network will build a huge ecosystem covering NFT, social networking, gaming, and DeFi in the future. The scale of the system will be as high as one trillion US dollars. At present, QitChain is in the process of construction and upgrade of the main network architecture, and the ecological project is expected to be launched soon.

There are various indications that although the Qitcoin is still in the initial stage of development, it does not affect the market’s judgment of this high-quality project. Take Dao as an example. As we all know, it is difficult for Dao organizations of ordinary projects to reach a consensus in attracting volunteers, but Qitcoin attracted nearly 10 industry professionals from around the world at one time only in the first community recruitment event. The attractiveness of the project to the market is evident. According to people familiar with the matter, the QTC Dao organization has been established for less than half a year, and the number of volunteers in the organization has exceeded the 30 mark. Recently, in order to help the QTC project better govern, the QTC Dao organization has also established a council.

In the opinion of the team, the reason why Qitcoin is recognized and valued by himself is that the project not only retains the advantages of Bitcoin in design, such as deflation mechanism, but also cleverly solves the problems encountered by Bitcoin in the development process. For example, in terms of energy consumption, QTC uses hard drives with low power consumption as an ecological construction tool, which is more environmentally friendly and more energy-efficient than Bitcoin’s huge energy consumption under the POW consensus. In the network construction, QTC creatively chose the hard disk mining technology in view of the high price and limited output of bitcoin chip machines, which not only lowers the threshold for investors to participate, but also helps investors save costs.

Excellent economic model to promote the rapid and healthy development of the Qitcoin ecosystem.

In the period of great development of the industry when a hundred flowers contend, blockchain projects are blooming everywhere. In this regard, a QTC investor said that there is no shortage of projects at present, but QTC projects have been selected from many investment targets and included in the investment portfolio, mainly because of QTC’s excellent economic model.

According to insiders, in the current hot CPOC track, including Chia, CRU, and Fil, at least a number of projects have given investors the opportunity to actively participate. However, projects that can protect investors’ rights and interests by balancing market liquidity like QTC are rare.

From the comparison of the recently popular FIL, CRU, XCH and QTC projects, although the four projects have adopted the POC consensus algorithm, and even FIL, CRU and QTC have adopted the pledge participation method, but the tokens in the secondary market and the performance is quite different.

Taking CRU and FIL as examples, it is not difficult to find from their trend charts that since the second quarter of 2021, the two major tokens have been in continuous decline or consolidation. If good returns are given to investors or ecological participants, the two major project parties need to take corresponding measures to continuously improve the network and project ecology. On the other hand, the price trend of QTC, although the price has dropped from the highest price, the overall trend has remained stable and has stood firm on the 5-week moving average.

In addition, judging from the comparison between the recently popular Chia project and QTC, the continuous growth of QTC computing power shows that ecological participants are continuing to enter the QTC project.

From this, it is not difficult to find that there is a certain relationship between the price trend of the secondary market of the token and the economic model of the project and the growth of computing power. Some investors have analyzed that the relatively stable price trend of QTC mainly depends on the good economic model of QTC and the balance of supply and demand.

QTC white paper shows that the total circulation of QTC is 105 million, which is 5 times the total circulation of Bitcoin (2100). Compared with the Bitcoin network that packs a block every 10 minutes, the Qitchain network only needs to pack a block every 3 minutes. In terms of rewards, the Qitchain network rewards 75 QTC per block, which is better than the mechanism of rewarding 50 BTC every 10 minutes in the initial stage of the Bit Network. For ecological participants, this is friendlier.

“Obviously, such an institutional arrangement is conducive to the formation of a ‘double pledge’ effect. First, the big players in the ecosystem, in order to compete for reward rights, will increase their pledge efforts to enter the top ten pledged TOP10 nodes, which is conducive to reducing the circulation of QTC in the market. The second is ecological participants. In order to maximize the input-output ratio, most of them will choose to pledge participation; secondly, 80% of the rewards obtained are released linearly, which effectively reduces the selling pressure of market tokens.” The person analyzed.

In terms of development ecology, while vigorously developing the CPOC algorithm, QTC has recently upgraded its technology to be compatible with the POST consensus algorithm. From the point of view of the continuous growth of computing power, this strategy has obviously achieved good results.