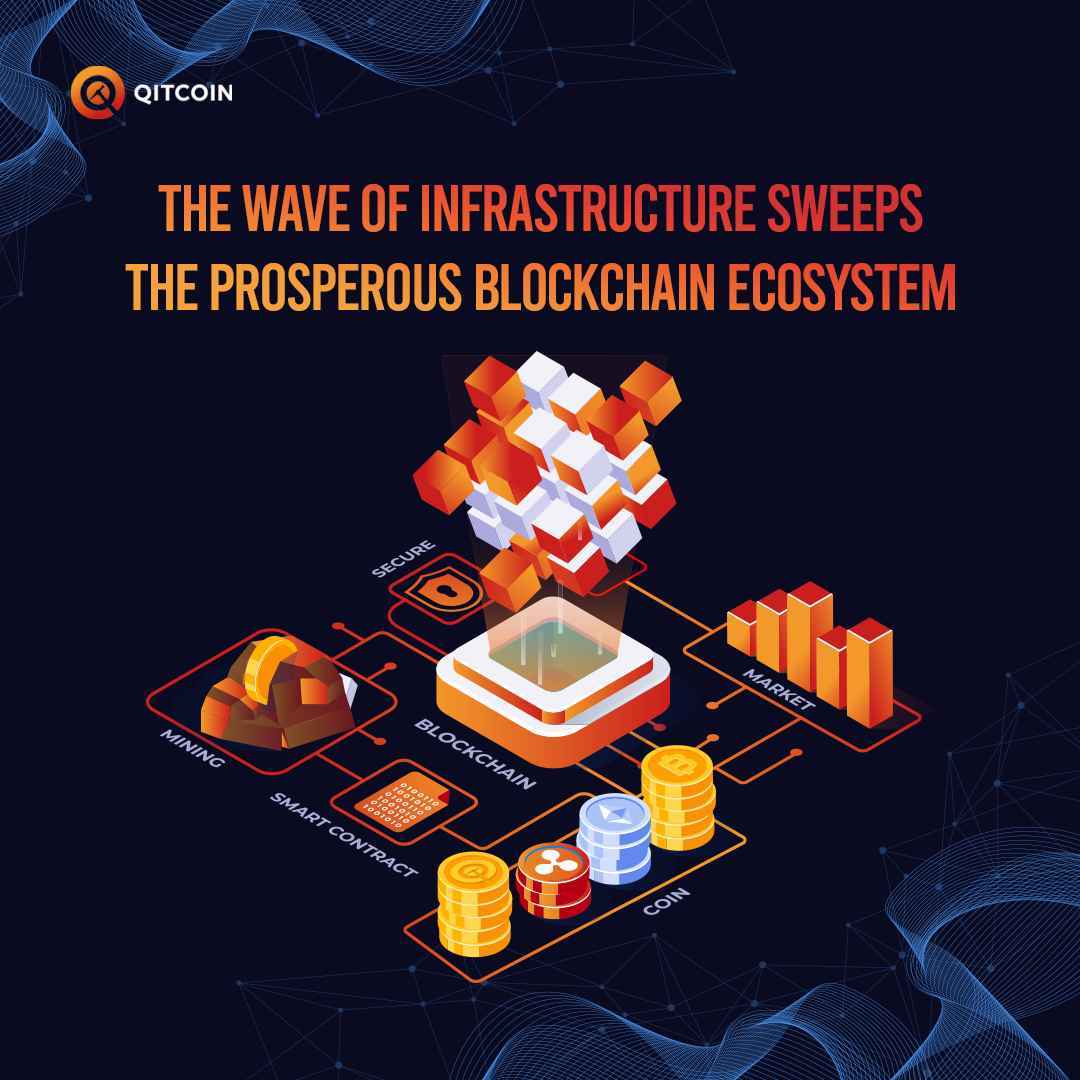 The wave of infrastructure sweeps the prosperous blockchain ecosystem

The two giants in the blockchain encryption market are BTC and ETH. According to the encrypted asset data website Coinmarketcap.com, as of January 12, the total market value of encrypted digital assets was US$20 trillion, of which BTC and ETH accounted for 40.2% and 19.2% of the total market value, respectively. In other words, the two giants BTC and ETH occupy more than half of the market share in the market of 16,000+ digital assets. It can be seen that BTC and ETH are absolutely “first-in-command” and “second-in-command” in the blockchain world position.

Talking about BTC, all of you should be familiar with it. Since its birth in 2008, it has been more than ten years, and its price has soared, from the initial 50 BTC to buy two pizzas, to a digital asset with a maximum value of 69,000 US dollars. BTC is no longer a simple peer-to-peer digital asset, but more of a stored value asset comparable to gold. Before BTC became an asset with stored value, BTC was loved and valued by the public because it practiced and applied blockchain technology for the first time, laying a strong foundation for a new revolution in the Internet.

So why is Ethereum (ETH) able to occupy the “second-in-command” position after BTC? The most important point is the landing of smart contracts, which has strengthened the ecological development of Ethereum. If BTC is a simple store of value asset, then Ethereum is a huge ecological organization in the blockchain.

The concept of smart contracts can be traced back to the 1990s. In a 1995 paper titled “Smart Contracts: The Cornerstone of Digital Markets,” Nick Szabo described a smart contract as “a set of promises specified in digital form, including an agreement by the parties to fulfill those promises.” In simple terms, is to build various types of contracts in our daily life on the blockchain in a digital form, and can automatically execute the code on the blockchain.

Since the Ethereum white paper was published in 2013, a new generation of applications based on blockchain + smart contracts has emerged. Up to now, the number of DApps based on Ethereum has reached 2900+, accounting for 75.3% of the total number of blockchain DApps. The difference between Ethereum and BTC is that BTC can only be used as an asset for distributed bookkeeping on its network, while Ethereum is the infrastructure for major application scenarios of the blockchain, gradually forming Turing completeness. huge ecosystem. After nearly ten years of practice, Ethereum has endowed the blockchain with unlimited imagination and stronger vitality. This is also a jump to a new height online since the advent of the Internet.

With the gradual expansion of ecological development, Ethereum has inevitably encountered some pain points, such as high gas fees, and rising costs for developers and users; TPS is too low to meet the needs of more DApps, causing users to Bad experience. A series of factors also make more and more developers develop the underlying infrastructure of the blockchain — the public chain. For example, BSC, which is currently second only to Ethereum, Solana, which focuses on high performance, Polkadot, which can realize cross-chain development, and QitChain, an information aggregator that empowers blockchains, etc. Due to the openness and inclusiveness of the blockchain, various innovative projects can create different fireworks, thus making the blockchain prosperous.

3. The public chain where a hundred flowers bloom

Now all kinds of public chains are emerging one after another, and they all have their own positioning, but in the end they have to develop their ecology in order to gain a foothold in the market. Just like many e-commerce platforms, Taobao, JD.com, Pinduoduo, etc., first of all, many merchants need to settle in, and products can continue to operate; secondly, they need to attract more users and give users the best experience to continue to develop; The last and most important point is that the development of this platform needs to be promising in order to have a place in the market. Similarly, the public chain also needs to establish various DApps first, improve the user experience, solve the needs of users, provide users with the best services, and finally achieve the purpose of blockchain development — the ultimate value of users is returned to users.

So, let’s take a brief look at each of the public chains with their own characteristics.

BSC is a public chain with a market value second only to Ethereum. At the beginning, it was mainly to solve the programmability and scalability of Binance Chain. It can effectively maintain the high performance of Binance DEX while supporting smart contracts and virtual machine compatibility functions. BSC is compatible with the existing Ethereum Mainnet, most DApps ecological components and tools can run on BSC, supporting all existing Ethereum tools along with faster finality and cheaper transaction fees. It comes with efficient native dual-chain communication, and is optimized for scaling high-performance DApps that require a fast and smooth user experience, improving interoperability.

The Token of BSC is BNB, which is mainly used for developers to deploy smart contracts on BSC, which can be used as gas fees; users can obtain block rewards by staking on BSC validator nodes; they can perform cross-chain operations, such as on BC and BSC carry out cross-chain transfer of assets. In addition to this, it can also be used to support most of the fees for BC and BC DEX.

As of January 12, 2022, the locked volume of DeFi on BSC is $26.017 billion, the current price of BNB is $459.05, and the total market value is $76.569 billion. There are as many as 128.2 million addresses holding Token, and the 24-hour transaction volume reaches 2.729 billion US dollars. Eight categories of projects, including DeFi, games, basic tools, wallets, verification tools, communities, work tools, and NFTs, have been deployed on BSC, with a total of 1,187 projects. Including innovative DeFi projects such as PancakeSwap, BakerySwap, SushiSwap, and Alpaca Finance.

Solana is a high-performance public chain designed to provide scalability without sacrificing distribution or security, enabling an Internet-scale blockchain network. According to the official website, the Solana network wants to achieve a speed of 710,000 TPS. The current speed of the entire network is 2,735 TPS. Although it has not yet reached the designed speed of 710,000 TPS, it is already a very high speed compared to other public chains.

Solana’s Token is SOL, which is mainly used for transaction fees for users and developers to conduct transactions on the Solana-based network; incentive rewards for developers to develop on Solana. In addition, SOL can also be used as a pledge Token to pledge to the network and obtain certain income.

Polkadot is a relay chain capable of connecting mutually independent blockchains, with bridging parachains that provide bidirectional compatibility. Information can be exchanged between each individual blockchain under the premise of mutual security. Its main advantages are: strong scalability, can process multiple transactions at the same time, significantly improve the scalability of a single blockchain; support different scenarios, each blockchain can perform scenarios on Polkadot according to its own actual functions Design; Sharing, multiple blockchains and DApps deployed on Polkadot can expand the sharing function and effectively achieve cross-chain functionality and interoperability.

Polkadot’s Token is DOT. As an economic model for inflation, the total supply of DOT is 1 billion, and its main uses are as network transaction fees, staking, governance, access to parachain slots, and enabling key functions in the network. As of January 12, 2022, its circulation is 98.7579 million DOT, the market price is $25.64, and the total market value is $28.243 billion. Polkadot has conducted 7 slot auctions with a total of 111 projects deployed, and the eighth slot auction will take place on January 20–27,2022.

Qitchain is an independent public chain that aims to empower the blockchain, perform distributed storage and distributed retrieval of valid data in the blockchain, and form an effective information aggregator in the blockchain network. At present, QitChain is in the construction stage of the underlying facilities and is upgrading the underlying protocol for secure payment. In the future, it will gradually build smart contracts, establish an ecosystem, integrate popular track projects such as NFT and Metaverse, and provide more innovative blockchain projects and applications. QitChain benchmarks against Google in the Internet, provides secure storage and retrieval services for universities in the blockchain field, and finally forms a distributed search engine system that touches a huge user base and developers.

The Token of QitChain is QTC, with a total supply of 105 million, mainly allocated 5% to the foundation, 15% to the search laboratory, and 80% to the block reward. The main uses are for gas fees, search and storage costs, mall fees, and knowledge fees. Its advantages are: the multiple deflation of the CPOC economic model supports the QTC market price; in the era of blockchain Web3.0, there are already more than 10,000 encrypted projects, forming a huge data market, but most blockchain projects are isolated, and there is no interaction between data. Users need to find information. Data needs to be searched network by network. The scale of blockchain data information is huge.

The current market and user needs are to quickly, efficiently and accurately search for the information and data they want to know, and QitChain Network is rapidly deploying the underlying facilities of the blockchain search engine. As a blockchain network that uses hard disks for block rewards, it combines the advantages of “green BTC” Chia, and the threshold is low. Everyone can effectively participate in the network and maintain the network. The global node distribution effectively ensures the security of the network. QitChain Network is based on the CPOC consensus mechanism, and storage service providers have a cost to participate in network maintenance, which increases the cost of network attacks. Currently, the number of QitChain Network global nodes continues to grow. Chia is the most secure network beyond the BTC network, and QitChain Network will be the more secure blockchain network beyond Chia.

The above projects are only some of the public chain projects, and some are gradually forming their own huge ecology, such as BSC and Solana. Some have their own unique positioning and aim to serve the entire blockchain, and innovative development has given the blockchain development path unlimited possibilities, such as Polkadot and QitChain. Overall, the blockchain is still in the early stage of development, the underlying infrastructure will only increase, and the creative content will gradually increase.

The future of blockchain is underway. From the obscure BTC to the brilliant DeFi, NFT, DAO, and Metaverse, blockchain technology has always brought different surprises to people. What amazing innovations will the blockchain have in the future? Let us witness the new era together.