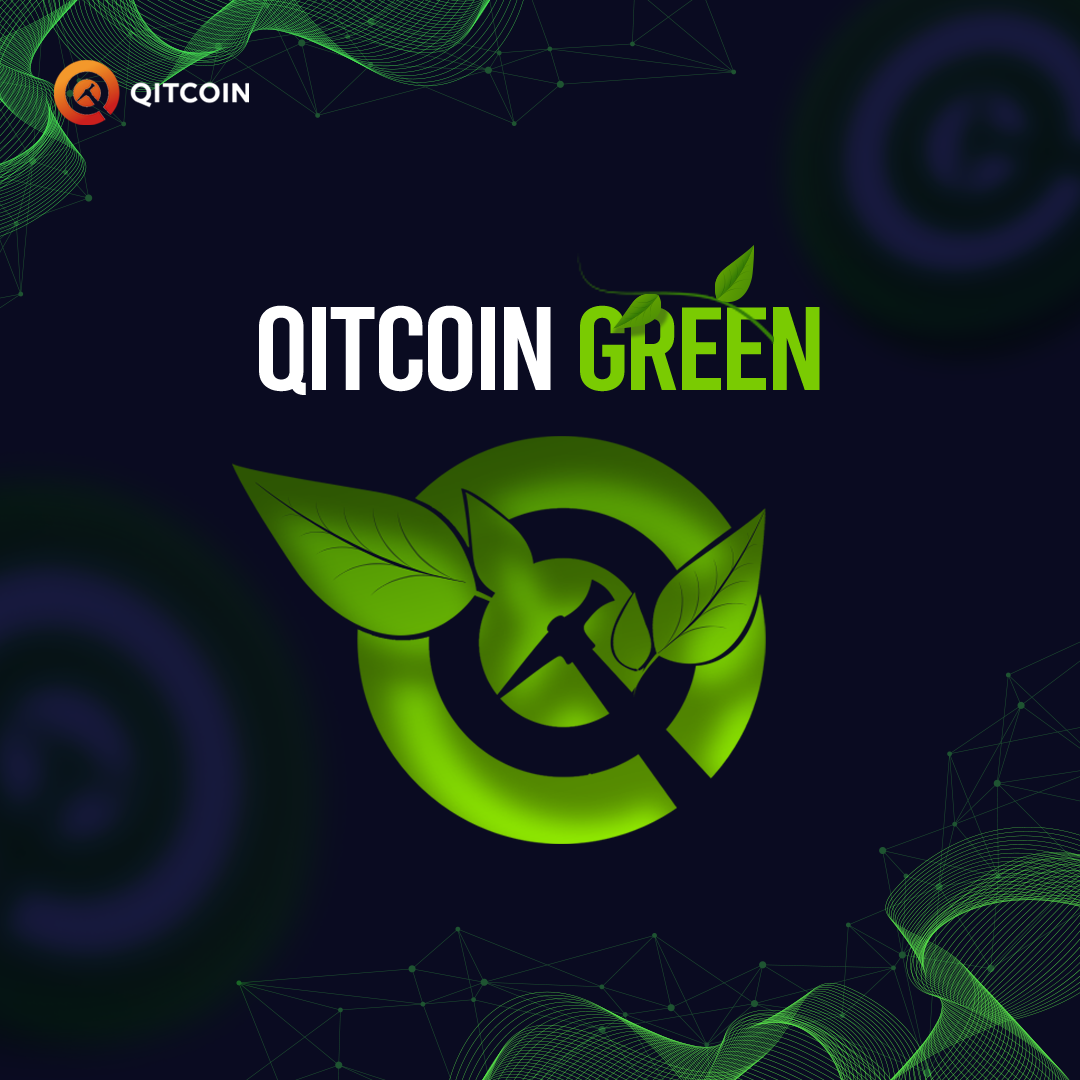 Qitcoin; a Carbon Neutral Cryptocurrency and its Role in Clean Environment

Qitcoin Green is a project that aims to make the blockchain carbon-neutral. Thus, we call it Carbon Neautral Cryptocurrency. Its proof-of-capacity consensus algorithm that is based on valuable output eliminates all unnecessary energy consumption. Miners and storage providers have unique identities associated with their network activity. Because of its inherent technological advantages, it has the potential to surpass traditional companies in their efforts to combat climate change.

Using on-chain data, this activity can be used to model electricity consumption. It is possible to match the electricity use of Qitcoin nodes to renewable energy. The agreement aims to decarbonize the crypto space in future and ensure that the industry is carbon-neutral by then. It facilitates the transfer of measurable progress as well as additional assistance in meeting objectives when needed. It provides a baseline for the use of renewable energy in the cryptocurrency world and promotes the creation of open-source methods that aid in the decarbonization of mining.

Overall, the blockchain and cryptocurrency industries have the potential to become significant players in renewable energy and drive objective, actionable change toward sustainability.

Qitcoin Green will undoubtedly play a role in this. By taking steps to measure and reduce environmental impacts, the network is already ahead of the majority of blockchain projects. Qitchain has already proven useful than other cryptocurrencies by being a carbon neutral cryptocurrency. Furthermore, by selling carbon credits, carbon neutral crypto will assist QTC in making a profit in the market. However, blockchain technology may be used to track carbon offsets, which can help to overcome some of the issues. Because carbon dioxide levels are higher now than they were previously, any action that addresses the emissions problem is worthy.

Why Is Qitcoin a Carbon Neutral Green Cryptocurrency?

Qitchain is intended to facilitate people’s participation in the emerging crypto market while ensuring an environmentally friendly system. It not only achieves lower energy consumption but also facilitates the participation of miners’ self-made common components, thereby extending the system’s stability.

QTC follows in the footsteps of BTC in that it is designed to serve the majority of individuals from the start. CPOC could further publicly acknowledge crypto and help the users to engage of the QTC economic system with a much more user-friendly consensus on hard drive capacity. Qitchain has made itself capable of addressing sustainability issues. Cryptocurrency’s biggest challenges are energy usage and e-waste. By modifying the mining technique, companies can lower their energy consumption by 99.99 percent. The rising demand for cryptocurrencies has compelled developers to make attempts to create an environmentally sustainable cryptocurrency, which Qitcoin has already promised to deliver.

Read also: What is conditional proof of capacity cpoc for cryptocurrencies?

QTC has adapted a mechanism called CPoC. The mechanism is simple, sustainable, and environmentally friendly. Most of the other cryptocurrencies’ design is based on the PoW algorithm, which utilizes a lot of computing power.

Another issue is that it is a slow process that takes about 10 minutes to generate a single block.

The cryptocurrency based on this mechanism usually handles seven transactions per second and more efficient whereas other consensus mechanism provides a limited quantity of coins and use expensive technology.

Devices used in the mining of other cryptocurrencies are not widely available in the retail sector. The price fluctuation of them has made it difficult to earn a good living; in fact, their transaction has dropped considerably in recent months. Thus, the mining of these cryptocurrencies is not much profitable.

In CPOC, hard drives are employed as the primary carrier of consensus. It allows more ordinary people to participate in the forming of computing power by using their own computers. CPOC can better broadcast cryptocurrencies with a more user-friendly consensus on hard drive capacity. Thus, we can say that the Proof of Capacity Cryptocurrency is a friendly and economical as it is less energy intensive. Many people consider this more viable substitute for the present mining methods.

Qitcoin attempts to overcome the problem of high power consumption and high cost consumption by addressing the issue of block production cost. When we consider the benefits of CPoC, we can see it saves computations, whereas others, such as PoW, discard old calculations in order to create new ones. Every person involved can become a block grower, maximizing the efficiency of decentralization and equality. Qitcoin carbon neutral cryptocurrency is what one needs.

When designing incentives, Qitchain Network employs a dual incentive method. Mining can be done unconditionally or conditionally to modify each user’s profit. Qitchain Network uses a strategy to guarantee adequate advancement of the chain and the development of new miners, thereby ensuring the community’s long-term positive development. It has a capacity of the network of 3000P in total. The goal of this sophisticated (CPoC) mining framework is to solve difficult hash tasks. It aims to find a remedy to the hashing of PoW and has a better chance of winning the mining conflict. Miners are more worried about cost than they are about environmental construction. Qitchain adopting CPoC system has made it easy to expand. The hard disk power consumption is lower, and miners’ income will be clearer in Qitcoin.

The primary goal of establishing QTC was to make the mining process more accessible to the average person. The current mining infrastructure has several faults that dissuade blockchain from being as decentralized as it could be. Mining from other mining networks has high initial costs. Cryptocurrency mining has made it very hard for the common citizen to mine because it necessitates a lot of expertise in specific devices. Not just that, but it necessitates a large amount of resources, making mining process more tough and time-consuming. As a result, the everyday user is hesitant to mine. The Qitcoin’s Carbon Neutral Cryptocurrency mining system employs hard disc storage to make the mining process less costly and much more feasible. Anyone can now mine with QTC. Because Qitcoin is devoid of the compatibility issues as it does not consume high energy. It also does not require any specialized equipment or professional knowledge.

The CPOC consensus algorithm serves as the foundation for it. As per the software’s economic model, it generates a block once three minutes with a network capacity of 3000P. To clarify, anybody can mine QTC with ease. We believe that developing a simple mining system will result in a safer and more well-run product sprint by the community in a decentralized manner.

The PoW process is more energy-intensive. It compels miners to transmit currency, having caused the mining industry to suffer. Because it necessitates specialized equipment and in-depth expert knowledge, this method generates monopolies, cruising normal people out of the market.

Qitcoin has a Proof-of-Capacity (PoC) system in place that enables anybody to partake in mining. It makes it simple for miners to join since all they would want is a hard disc, which is widely accessible on the market. This is fairly easy for workers to predict their earnings because it consumes little power. It also helps to reduce the risk of price fluctuations in the second hand market.

As a consequence, the Qitcoin Carbon Neutral Crptocurrency ecosystem can solve miners’ problems with its simple, inventive, and low-cost mining process.

To summarize, Carbon Neutral Cryptocurrency encrypted digital currency is being adapted by companies to make cryptocurrency more sustainable and environment friendly. Qitchain already way better than other cryptocurrencies and has adapted the CPOC mining mechanism. It is supposed to me more eco-friendly. Moreover, carbon neutral crypto will help it to make the profit in the market by selling its carbon credits; on the other hand, blockchain technology is useful to track carbon offsets which can solve some of the problems. As the level of carbon dioxide is higher now than they’ve been earlier, so, any action that addresses the emissions problem is worth considering.

People have initiated the idea of carbon credits which will allow companies compensating the carbon dioxide emission; climate and conversation groups of the world will manage these carbon credits. The method developed in order to fight against the climate change; the idea hidden behind this method is that everyone will have a limit of emissions. If suppose an organization crosses the limit; the money will be used to purchase carbon credits where purchase cost will be used in protecting forests and developing renewable energy system. Thus, the future of Qitcoin’s Carbon Neutral Cryptocurrency with the aim of saving climate has already entered to the bright door where people will enjoy the investment in blockchain with zero side effects.