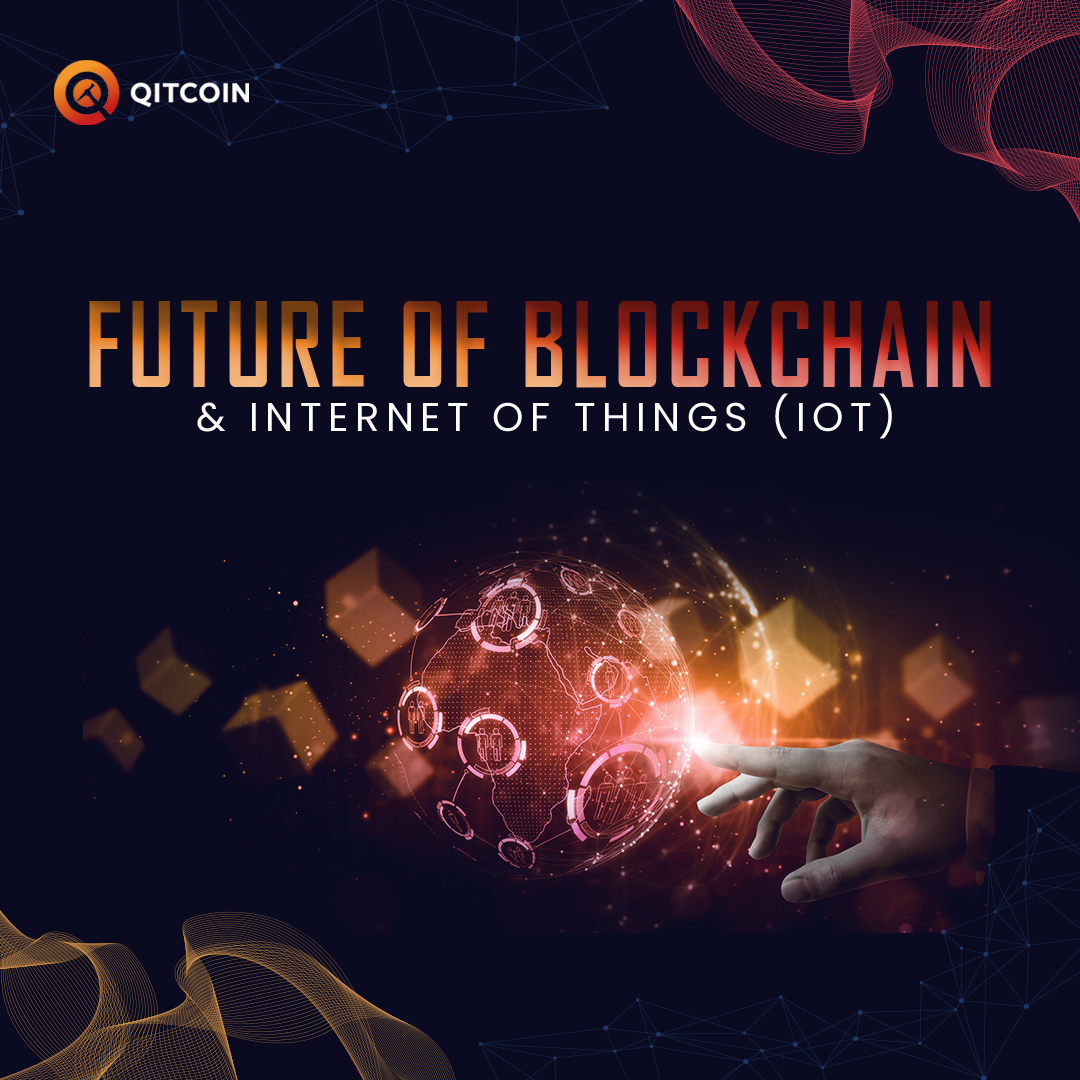 The Internet of Things (IoT) has the capability of connecting all devices via a cloud-based ecosystem. It has the potential to underpin the architecture of smart cities in the future, making correspondence far more simplified and effective than they are today. However, one major impediment to IoT is that it is still heavily reliant on centralized platforms. This can expose sensitive data to hackers.

Because Internet of Things applications by definition are dispersed, it is only natural that distributed ledger technology, such as blockchain, will play a significant role in how machines interact directly with one another (retaining a ledger and thus track of not only gadgets but also how users communicate). In the scenario of tagged goods, they may also be in what state they are in and how they can be ‘handled.’

Blockchain intends to serve as the foundation for applications that require transactions and interconnections. Smart contracts are one of the examples of it. Contracts that are inevitably conducted out when a particular criteria is fulfilled. As a result, blockchain technologies can enhance not only IoT compliance, but also IoT attributes and cost-efficiency.

Blockchain is a technology to address this issue. As previously discussed, blockchain; a fully decentralized ledger of transactions registers data in a manner that precludes hacker attacks and data alteration. It accomplishes this by recreating transactions and distributing them to “nodes” throughout the network. Blockchain would enable “smart contracts” to accomplish independently and decentralizedly, resulting in a web of network devices that would give consumers control over their own information.

Unfortunately, there are impediments to a complete merger of blockchain and IoT. At the moment, all IoT systems that “speak” to one another should be on the same blockchain. A future IoT will have to depend on a system of blockchains, similar to how the online world moves on a massive web of servers. As a result, scalability is a significant barrier to combining blockchain and IoT, as existing blockchains have not yet reached this level of competence.

While there are challenges, combining block chain technology with IoT would be groundbreaking. It would keep a profile of each and every IoT transaction that one cannot modify, data processing becomes far more safer. Furthermore, it would optimise the supply chain process, manufacturing lines to consumers—by providing documentation to all stakeholders as needed. Furthermore, a completely integrated IoT and blockchain will connect and streamlined businesses that depend on each other and, such as insurance providers and supply chain logistics.

Blockchain is a decentralized, immutable ledger that is translucent and divvied up. The consensus algorithm is at the heart of blockchain. They determine how a blockchain operates. With the discovery of modern blockchain tech potentials, researchers are eager to find a very well Byzantine fault – tolerance consensus mechanism. Developing a worldwide consensus mechanism or designing a cross-platform plug-and-play software system for incorporating different consensus algorithms are both highly appealing ideas. Stellar Consensus Protocol (SCP) is a worldwide consensus algorithm that promises to be Byzantine Fault Tolerant (BFT) by incorporating supermajority segments and federalized byzantine fault tolerance. One can examine the operation of this consensus and its correlation with other protocols.

Also hyperledger is a transparent project where the advanced and effective notion of practical byzantine fault tolerance is planted. As well as, a framework where numerous other consensus procedures and blockchain apps can use in a plug-and-play manner.  It is critical for any development company or research scientist to understand how blockchain systems operate and how to implement them for an IoT application. Based on findings it is concluded that an attempt to integrate is not always the right alternative to be used in an IoT project. It may be preferable to use a conventional dataset or an application based on Directed Acyclic Graph (DAG) ledgers. Thus, in making correct managerial decision on whether or not to use blockchain, it is needed to ascertain whether or not the following aspects are obligated for any project.

Blockchain provides various benefits, some of them are mentioned below:

In a conventional IoT application design, nodes interconnect with gateways, which send data from the nodes to a distant cloud server. As a result, if peer-to-peer interaction is not a preferred choice and is not required for the application, other channels of media between many nodes can be regarded.

A traditional blockchain necessitates a significant level of decentralisation in order to guarantee faith among network participants, which usually necessitates that nodes have a replica of the transaction records on the chain. One must consider IoT because of the low computing capability and small storage capacity.

Blockchain is a type of distributed ledger, which means that all of the information records on the blockchain and distributes across the network’s nodes.

Because blockchain technology eliminates any kind of centralized power, no team can substantially alter any network parameters to their advantage. Furthermore, the use of cryptography and other encryption algorithms adds an added level of safety to the framework.

Scalability refers to the blockchain’s attempt to keep normal functioning in the face of massive networks, excluding the potential of low processing span, system fluid retention, tends to lag, and so on. Because a blockchain gains momentum and clamor, it should be capable of handling gazillions of operations per second.

Users or anyone can view every payment and its affiliated details by examining a basic shared ledger or partaking in a personal blockchain network.

Despite the fact that there is no centralized entity to verify and validate transactions. Every deal in the Blockchain regarded to be extremely safe and validated. This is only possible as a result of the consensus mechanism, which is a critical component of any Blockchain system.

A consensus algorithm is a method that allows all peers in the Blockchain platform to concur on the current condition of the decentralized system. Consensus mechanism accomplishes reliability in the Blockchain network. It builds confidence among unidentified peers in a cloud computing environment in this manner. Essentially, the consensus procedure provides that every new block contributed to the Blockchain is now the only version of the fact that all nodes in the Cryptocurrency consent on.

The Consensus mechanism protocol has concrete objectives, such as reaching an agreement, collaborative effort, partnership, equality for all nodes, and required involvement of all nodes in the consensus protocol. As a result, a consensus mechanism seeks to establish a common agreement that primarily benefits system.

After a transaction has documented to the shared ledger, no attendee can alter or tinker with it. To action and rectify in a transaction record; a payment update must be added to undo the mistake, and both transfers are now noticeable. The public ledger and its unchanging document of exchanges are accessible to all participants in the network. Activities processed only once with this digital ledger, eradicating the unnecessary duplication that is typical computer systems.

Challenges of IOT and Blockchain

According to some researchers, the following are key obstacles for blockchain ecosystems and IoT participants:

Innovation, particularly safety, comes into the equation. In Internet of Things evidence where Cybersecurity is already a challenging issue. It is evident that safety must be prioritized much more. It is worth noting, however, that block chain technology can also be seen as a means of securing the Internet of Things. As previously mentioned, overall security focuses.

Operational challenges include the business strategy and practical details. As this necessitates many contracts and, of course, many stakeholders in a large ecosystem. Consider the IBM logistics case study.

Compliance management problems, some people discuss culpability facts of the case of measures undertaken by tools. These are based on a principle that automatically activates by a blockchain-based implementation and prompts by another blockchain-based app. Then there’s the above- noted instance of smart contracts. Contracts, as you are aware, are far from simple, even outside of the context of IoT and blockchain.

One advantage about using block chain technology in several applications, not just IoT, is that almost every transaction is recorded. Once they enrolled on the ledger, no one can alter these documents. As a result, it is almost impenetrable to hackers.

Furthermore, IoT on the blockchain will enable another more simple system from supplier to beneficiary and everyone in between. One area where the old system failed miserably was in trying to deal with record keeping on time. That’s much quicker now that everyone has direct exposure to all records. It is a simple and safe way to register them.

Nicolas Windpassinger, author of ‘Digitize or Die,’ an IoT book for virtual transformative leadership, wrote about the technical realities of blockchain in IoT. He also discussed about how block chain technology can expedite the progression of IoT in the spring of 2017. Blockchain is a technology that has the potential to be the missing component, empowering peer-to-peer contracting behaviour without the need for a third party to “certify” the IoT operation. It consistently addresses the challenges of virtualization, single statement of failure, time stamping, track, confidentiality, confidence, and durability. Blockchain can help to have a simple architecture for two or more devices. It would have the ability to straightforwardly transmit a piece of property. Such as finances or data, between each other via stable and safe time-stamped contracting terms.

Iot systems will use decentralized applications to facilitate message exchanges, which will then design the amicable settlement between two parties. This technology helps intelligent technologies to function autonomously without any need for centralised authority. When this peer-to-peer payment extends to human-to-human or human-to-objects/platforms transactions; it fully distributes trustable internet platform.

COVID-19 has generated a logistical problem for both vaccine distribution companies and healthcare staff all over the world. Different kinds of inoculations especially Moderna and Pfizer most widely used. These vaccines must store at temperatures below zero degrees Fahrenheit or they will degrade. This vaccine challenge is a prime example of how IoT and blockchain networks can collaborate to improve operations and dispersion.

Vaccine makers can place IoT sensors on vaccine wrapping or even personal vials. This shall be allowing resellers to monitor and track their position and temperature throughout shipment. Also, it will speedily recognize and fix emerging problems. When the samples start arriving at vaccination centres, medical workers can search the bundles to gain instant access to vital information about vaccine durability.

IoT applications and Blockchain have the capacity to change funding via smart payouts. JPMorgan Chase & Co., for example, lately remotely controlled blockchain reimbursements between Earth-orbiting satellites. As an experiment, the bank collaborated with GOMspace, a mission to bring supplier, to operate software on their satellite systems.

The experiment demonstrated that public blockchains can power device transfers. It is then able to develop a marketplace in which radars transmit messages to each other in exchange for payment.   A system like this could, for instance, enable a smart device connected to the Internet of Things. It helps to place orders from an e-commerce site. But, when it runs out, or give a self-governing unit who would have the capacity to afford gas?

While there are still hurdles for block chain technology and IoT, a consolidation between them has the ability to dramatically change our world.